Portraits of Rome and Spain with the CSO

CINCINNATI— The Cincinnati Symphony Orchestra paints musical portraits of Spain and Italy for its next program on Friday, September 28 at 11 a.m. and Saturday, September 29 at 8 p.m. The revered Maestro Rafael Frühbeck de Burgos, Musical America’s 2011 Conductor of the Year, joins the Orchestra at Music Hall for Respighi’s hugely popular Pines of Rome, known for its orchestral color and powerful off-stage brass parts. Maestro Frühbeck, who is currently serving as the CSO’s 2012-13 Masterworks Series Creative Director, appropriately paired this piece with the composer’s Fountains of Rome, sure to demonstrate the CSO’s full range. Hailed “An imaginative interpreter with a powerful technique,” by The New York Times and a frequent collaborator of Maestro Frühbeck’s, pianist Jorge Federico Osorio performs Falla’s multifaceted Nights in the Gardens of Spain. These concerts open with Falla’s Suite from El amor brujo completing a vivid, picturesque and crowd-pleasing concert program.

Prior to these concerts, Jorge Federico Osorio will be participating in Classical Conversations, an informative, casual discussion open to all ticketholders held in the Music Hall auditorium one hour before the start of the concert. CSO Associate Conductor Robert Treviño hosts the event. During intermission at both performances, Mr. Osorio will be signing CDs in the Music Hall lobby.

A recent highlight of Osorio’s long and distinguished career was the back-to-back performances of the five Beethoven Concerti with the Chicago Symphony Orchestra under the direction of James Conlon at the Ravinia Festival, where he has also performed a solo recital and concerti by Brahms and Mozart. In addition to performances in Berlin, Brussels, Dusseldorf and Stuttgart during the past several years, Osorio performed at the Concertgebouw in Amsterdam and the Gewandhaus in Leipzig. He also gave recitals in Boston, the San Francisco Bay Area and Chicago, where he performed on the prestigious Bank of America Great Performers Series at Symphony Center. Recent seasons have included concerts throughout Argentina, Brazil, Chile, Mexico and Spain, and performances with the symphony orchestras of Chicago, Pittsburgh, Milwaukee, Puerto Rico, New Mexico, Louisiana, Memphis, Colorado, Kansas City, Huntsville, Akron, Elgin and Florida (West Coast). Osorio has given two highly acclaimed New York City recitals at Lincoln Center’s Alice Tully Hall.

A prolific recording artist, Osorio has recorded a wide variety of repertoire, including a Brahms solo CD that Gramophone hailed as “one of the most distinguished discs of Brahms’ piano music in recent years.” Other recordings include Beethoven’s Five Piano Concerti and Choral Fantasy, Brahms’ Concerto No. 2, and concerti by Chávez, Mozart, Ponce, Rachmaninov, Rodrigo, Schumann and Tchaikovsky. Piano Español, a collection of works by Albéniz, Falla, Granados and Soler, received glowing reviews internationally and marked Osorio as one of the great interpreters of Spanish piano music in the world. His most recent recording is the Debussy Preludes (Books I and II) along with selected works by Liszt.

Recipient of several international prizes and awards, including the Dallas Symphony Orchestra’s Gina Bachauer Award and the Rhode Island International Master Piano Competition, Osorio is passionately involved in the performance of chamber music. In addition to having served as artistic director of the Brahms Chamber Music Festival in Mexico, he has performed in a piano trio with violinist Mayumi Fujikawa and cellist Richard Markson, and has collaborated with Yo-Yo Ma and violinists Ani Kavafian, Elmar Oliveira and Henryk Szeryng. He is also a dedicated teacher and is on the faculty at Roosevelt University’s Chicago College of Performing Arts. Osorio began his musical studies at the age of five with his mother, Luz María Puente, and later attended the conservatories of Mexico, Paris and Moscow, where he studied with Bernard Flavigny, Monique Haas and Jacob Milstein. Additionally, he worked with Nadia Reisenberg and Wilhelm Kempff. Highly revered in his native Mexico where he performs often, Osorio currently resides in the United States.

his post as Chief Conductor of the Danish National Orchestra.

Named Conductor of the Year by Musical America in 2011, other numerous honours and distinctions he has been awarded include the Gold Medal of the City of Vienna, the Bundesverdienstkreutz of the Republic of Austria and Germany, the Gold Medal from the Gustav Mahler International Society, and the Jacinto Guerrero Prize, Spain’s most important musical award, conferred in 1997 by the Queen of Spain. In 1998 Rafael Frühbeck de Burgos received the appointment of “Emeritus Conductor” by the Spanish National Orchestra. He has received an honorary doctorate from the University of Navarra in Spain. Since 1975 he has been a member of the Royal Academy of Fine Arts of San Fernando.

Rafael Frühbeck de Burgos has recorded extensively for EMI, Decca, Deutsche Gramophone, Spanish Columbia, and Orfeo. Several of his recordings are considered to be classics, including his interpretations of Mendelssohn’s Elijah and St. Paul, Mozart’s Requiem, Orff’s Carmina Burana, Bizet’s Carmen, and the complete works of Manual de Falla. 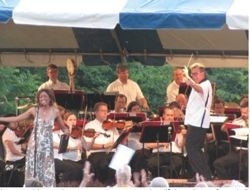 Free “Opera in the Park” Concert, June 9 in Washington Park